In this article, we interviewed Ms. Bahareh Sharifioun, the winner of the IFIA Best Medal title among 740 inventions from 32 countries, at the second INV International Competition of the International Federation of Inventors’ Association. Sharifioun’s idea was called “Smart Compact Gadget for Cars,” which gained her this award for being environmentally friendly, using clean energy, taking up less space, and being beneficial in today’s world. You can read the experiences she faced on her route in this essay.

Bahareh Sharifioun was born on December 4th, 1983, and is the last child of a relatively large family. With three sisters and a brother, she had an outstanding opportunity to gain experience regarding the world around her with a calm and carefree childhood. After primary school, the talented last child of the Sharifioun family studied at Farzangan school, an academy dedicated to capable students in Iran. Due to her interest in mathematics, she chose the field of “Mathematics and Physics” in high school and continued Electrical Engineering with Electronics as her field of study at university. She spent her studies at the university with excellent grades and engaged in her favorite scientific activities.

Also, participating and winning a place in the Robowar and Robocup competitions while she was studying at the university are some of the memories Bahareh Sharifioun remembers as the turning points of her life.

Bahareh had another great interest during high school: her eagerness to learn and explore the surrounding phenomena as a reason to pay close attention to details and reach the origin of any phenomenon. A strange interest that she mentions as one of the drivers of her professional life.

In high school, young Bahareh experienced programming much more professionally than her classmates. During the period when the students were only familiar with the BASIC programming language, Bahareh and her friends were busy programming with Pascal and C# and writing many different programs.

The year 2008 was a time of great challenge for Bahareh. Although she was accepted for the master’s degree in electrical engineering, she continued her professional career by continuing her studies in management, resulting in her MBA studies at Amirkabir University in Tehran and Berlin, Germany. During this time, she also got to know a foreign company, a company that had brought an American ERP to Iran and needed to rewrite it. The complexities of ERP systems were a big challenge for Bahareh, who was young and inexperienced in that field. But due to her curious spirit, she could handle this challenge. And in a short time, she started working as an ERP implementation manager in a company that was active in the field of electronic cards.

In 2011, she had the chance to enter Rahbar Company, the Information Technology Company of the Ministry of Commerce, which was in charge of several large national projects at that time. In that company, Bahareh Sharifioun was also involved in the electronic supply of oil industry goods project as a product manager, starting this product supply system.

Prominent Decision to Have a Big Business

In 2014, she diligently completed her master’s degree in MBA at Amir Kabir University and Berlin, Germany, and at the same time, she thought of starting her own business. “Bimeh.com” (Bimeh is the Persian word for insurance) was a platform that was able to provide both B2B (Business-to-Business) service in the insurance industry and was an entry to meet the needs of customers in the form of B2C(Business-to-Consumer). “Bimeh.com” became the facilitator of insurance in Iran and went through challenging days one after another but always had the support of Bahare Sharifion’s expertise and efforts.

But as the CEO of Bimeh.com, her work there had just begun. Innovation in the insurance industry was the most important thing that she and her group paid attention to, and because of this, they thought of changing the product presentation models. Moreover, they used unique marketing methods, bundling products and creating attractiveness in insurance fields, which had not been of much interest to the Iranian audience until then.

Sepas Holding and What Led to Invention

All the experience of Bahareh Sharifioun, which was gained on the way to building Bimeh.com, was used in the form of a group of companies called Sepas Holding in three industries of insurance, tourism, and payment. This holding came up because apart from the industry, Bahare Sharifion’s vision is to produce infrastructures that provide unmatched services to all elements of a business. And finally, in 2021, Sepas Holdings was born by combining all the companies in which Inv. Sharifioun played a role as one of the main members. This holding started from a company with only three people, and on the day of its establishment, it had 140 young people on its team 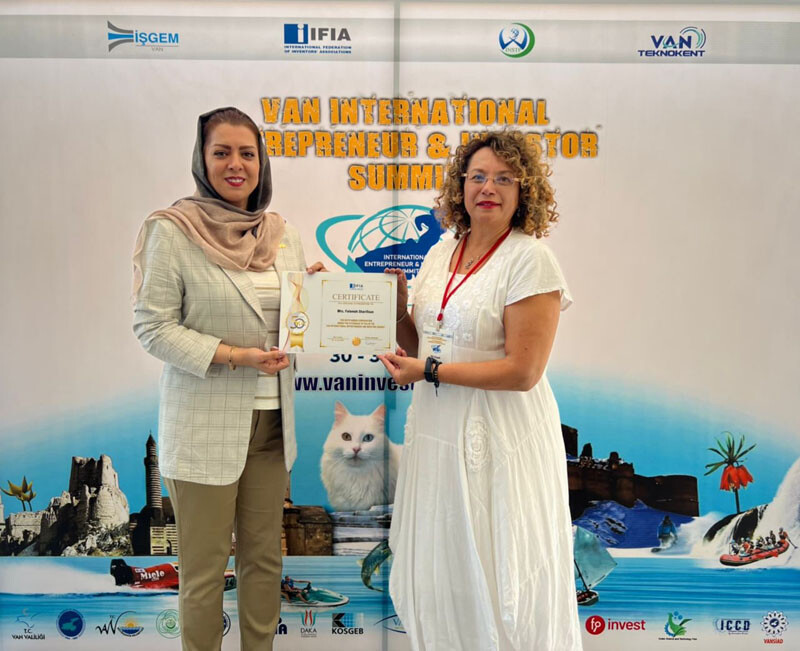 Since Sharifioun is educated in electronics, she thought of designing a tool that can record moments that may have a lot of legal burden on their business. For instance, at the moment of an accident, if there is a tool that can record the geographic location with high accuracy and complete details, then many possible risks and damages can be prevented. The speed of the vehicle, the place of its collision, and the technical conditions at the time of the accident are among the things that this tool can help insurance companies to reduce the risk of various damages.

With this goal, Bahareh Sharifioun put her idea on paper and started to think of innovation in the insurance industry, hoping that this device and its application can be used as a supplement alongside insurance companies for their risk management. Six months before this interview, Bahareh Sharifioun started to design a black box for different cars that could be connected to the car’s computer. This invention controls and manages all the internal areas of the car and records information by installing sensors that can record any incident, such as oxygen sensors, impact sensors, etc.

And now, this idea has grown with the name “Smart Compact Gadget for Cars,” presented by Bahareh Sharifioun, and has been patented internationally under the same name. Moreover, this invention has won several international awards, such as INV Membership Certificate, a Gold Medal, two Special Awards at the 7th International Invention Innovation Competition in Canada, and a Gold Medal at the Korea International Women’s Invention Exposition, etc.

How Does the Invention Work?

Bahareh Sharifioun plans to implement the prototype of this innovative device for the most popular car brands soon. This innovation can be commercialized in two different aspects as a mandatory tool for those who intend to buy insurance related to a car. The insurance company provides this device to its insurers. On the other hand, it can be used as an option in the automotive industry to install the black box on their cars and use the information. The device can be an important solution for the insurance industry to manage risks and possible damages. By using electronic circuits and connecting to the car’s computer, a device can detect and identify all the risk cases that may happen to the vehicle and record the incident at the time of the accident. The ability to inform the authority organizations simultaneously and adopt a complete and classified report of the incident and its details are among the things that this compact gadget can do.

Moreover, with the experiences mentioned above of Inv. Sharifioun, the product can be commercialized as an MVP and introduced into the market. And because of the many cars in Iran, it is possible to pilot the invention there and prevent insurance fraud.

Presence in international arenas has always been one of Bahareh Sharifioun’s goals. Her international personality became stronger when she, as an Iranian businesswoman, was the only Iranian woman entrepreneur in the 2022 FIFA World Cup Draw Ceremony in Qatar. In addition to receiving the title of “INV” inventor from the International Federation of Inventors’ Associations, she has experience judging national and international competitions in science, business, invention, and innovation. The path that Bahareh Sharifioun has taken is challenging but straightforward. Hopefully, with all its difficulties, this path will lead to a bright future in Iran’s insurance industry with her efforts and the “Bimeh.com” group.